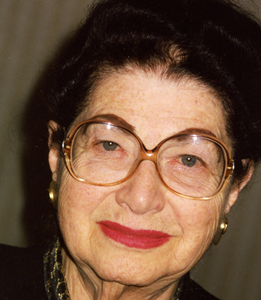 Doris J.W. Escher, MD, FHRS, was a pioneer in cardiac catheterization who was involved in cardiac pacing from its inception. In 1946, she became head of the cardiac catheterization laboratory at Montefiore Hospital in the Bronx (NY), where she subsequently taught her techniques to her colleague Dr. Seymour Furman. By 1950, she was aware of the issues with cardiac pacing resulting from her experience monitoring 150 patients undergoing open heart surgeries.

With Furman, she helped drive the development of transvenous pacing and co-directed Montefiore’s pacemaker program. There, she began the first pacemaker follow-up clinic and as the number of pacemaker patients grew, Doris recognized the need for routine and systematic surveillance. She and her Montefiore colleagues pioneered the use of transtelephonic monitoring to track the post-procedure status of patients and device batteries. In 1970, she co-authored the first American book on pacemakers, The Principles and Techniques of Cardiac Pacemaking. The Society recognized her many contributions to the field in 1989, honoring her with its prestigious Pioneer in Cardiac Pacing and Electrophysiology award.

Doris was deeply involved in the formation and growth of NASPE, first as Member #9 and later when she became the Society’s first female president in 1988. Throughout her career, she was a role model for female cardiologists, as well as a prolific author and educator. She taught widely in NASPE/HRS and ACC conferences and regional courses, and was active in many NASPE and Association for the Advancement of Medical Instrumentation (AAMI) committees and projects. She received her bachelor’s degree from Barnard College and her medical degree from New York University Medical School. She retired from Montefiore-Albert Einstein College of Medicine in 2006.

The Heart Rhythm Society is saddened by the recent passing of Dr. Escher on April 3, 2019. Doris was a unique individual who was respected and loved as a kind and passionate leader and educator. Her contributions to the Society, to the field, and to her fellows, cannot be overstated. For Dr. Escher’s full obituary, please visit here.